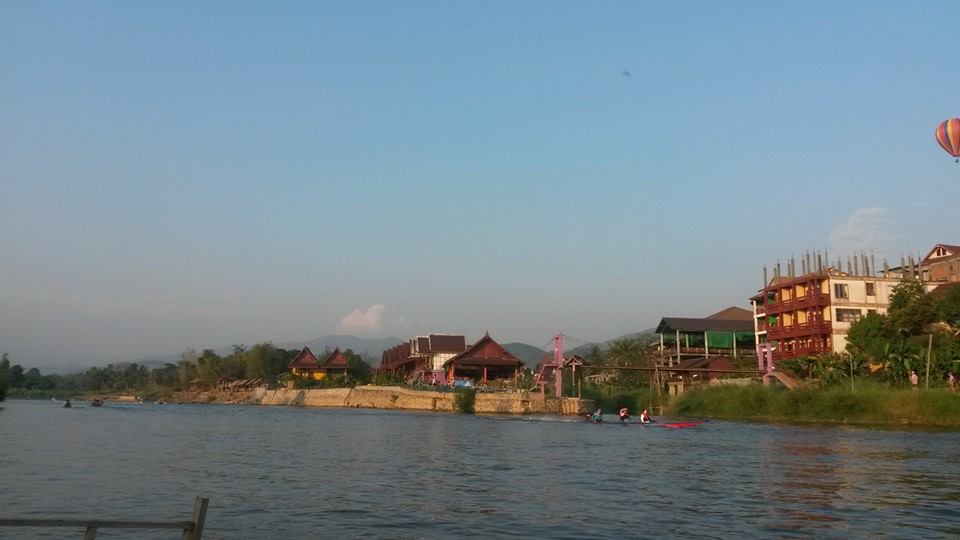 Pit Stop: 5 Things To Do at Vang Veing: Laos

Vang Vieng is almost like a pit stop enroute Luang Prabang.   The reason this tourist mecca has sprung up is the gorgeous Nam Song river and the magnificent karst mountains lining it.

The imposing limestone structures rise up out of the land and run for kilometres, framing the rice fields and lazy river. The stunning landscape especially the majestic mountains that form a circle around the Nam Song

River changes various hues as the sun changes color with each passing hour. Sit by the various riverside restaurants with friendly faces and have a fizzy lemonade or sip the chilled local beer  “Beerlao”

Tubing and Kayaking: This is a hot favorite at Vang Vieng – though I opted for the speed boat due to crunch of time and it was exhilarating. And to make things better, it started raining. Most of the people opt for tubing wherein you can just laze and  watch the sun set behind the mountains. The mountains are dotted with tine caves and a lot of people get off to explore these.

You can’t miss it, they make pancakes at almost every corner of the street. The best part is they  are cooked right in front of your eyes. The fillings can be of your choice. Locals who sell these come out late in the afternoon with prepared dough which is then extended and fried upon hot plates of their portable ovens – so that way you see that they’re fresh. Nutella is the hot favorite and rightly so – though I mixed it with a banana stuffing. It was the most gorgeous crispy, melting in mouth pancake I have ever had. There are various options of stuffings as well. Prices are from 10 000 KIP +, depending on what you order.

Unfortunately, I had not done enough or rather any research before going to Vang Vieng hence I completely missed the timings the hot air balloon took off. This is a huge regret. It’s a must do for everyone traveling to Vang Veing. Even though you might feel its a tad expensive but on comparing with what the rest of the countries offer its the cheapest option and a fantastic experience  Early mornings and sunsets are the sought after timings. Laap, sometimes known as “larb” or “laab”, is the national dish of Laos. Though it looks a bit messy, it’s absolutely delish. Laap is found almost in all the restaurants. This simple and popular meal is prepared with minced meat and blended with toasted rice called khao kua. Fish sauce and lime add a strong, citrus flavor and additional nutrition. Laap can be made of chicken, beef, duck, or pork and is served with sticky rice.Traditionally laap is served at room temperature and eaten with the hands, but most restaurants catering to tourists will provide utensils and bring it to you warm.

Another dish that I practically lived on was the “noodle soup” or Lao Pho – which is the Laotian version of the Vietnamese noodle soup pho. Flavored with garlic, cilantro, lime, and basil, this light broth with noodles is a great healthy option.

Tham Xang (Elephant Cave) Tham Xang Cave was once feared by locals due to a limestone formation inside that resembles an evil monster’s head. It was even taboo to drink the water flowing from the cave. But over the years the elephant head is revered and the pilgrims visit the site each year usually around around the Lao New Year in April, to sprinkle water on the elephant head and pray for good health.

To find the elephant head, use a flashlight and follow the small passage at the top right-hand corner of the cave behind the large golden Buddha. Village elders believe it is taboo to hit the elephant’s head, hunt for bats, or consume alcohol in this cave.

The steep stairs to the cave offers a stunning view of the plain stretching to the Mekong River. Interesting Buddhist items, including several Buddha images and a small black box containing Buddhist literature, decorate the cave. It is worth noting that Japanese soldiers used the bat droppings from this cave to make gun powder during World War II, and in the 1960s and 1970s, locals used the cave for shelter during the Indochina War.