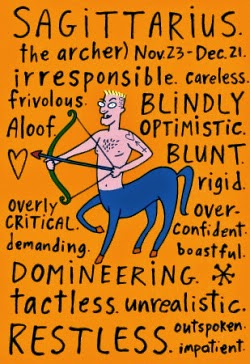 Top 7 Things NOT To Say To A Sagittarius

Cheerful Sagittarius is ruled by Jupiter, the largest planet in the solar system. Jupiter is the “happy” planet, full of energy and confidence. Sagittarians often reflect Jupiter’s larger-than-life persona.  The zodiacal constellation Sagittarius represents the centaur Chiron. Most of the centaurs were regarded in myth as bestial–they were, after all, half horse. However, the ancient Greeks had a great deal of respect for the horse, and so were reluctant to make the centaurs entirely bad. In fact, Chiron was renowned for his gentleness. He was an excellent archer, musician, and physician, and tutored the likes of Achilles and Hercules.

1.    Commitment Phobia!: Independence is Sagittarius’ principle, they crave adventure and excitement and welcome change with open arms. they are the biggest commitment phoebe of all zodiac signs. Romantic relationships often cause problems down the road because you hate the idea of staying with one person, having a family and living in one place forever, tied down to one person. Sagittarius is the sign of the philosopher and the explorer, they will go as far as road will go and explore every corner thoroughly in their ever eternal search for wisdom. Freedom is so important to Sagittarius that they will actually make decisions based on the amount of freedom that is given by the choice they have made, as a result, sometimes a good opportunity is turned down because of it’s high commitment need, but this is their choice so it is a good choice for them.

2.    Why Do You Travel So Much?: Sagittarians are the ultimate seekers. As the zodiac’s traveler, Sagittarius is the ultimate free spirit: optimistic, open-minded and ambitious. To keep an Sagittarius engaged, be willing to go on outdoor dates, something wild and wacky like paragliding, surfing, having a picnic by the riverside, anything. They love activities. These are the easiest people to get a date with but don’t think that this is written in stone, Enjoy the time you’ve spent with Sagittarius and be prepared to move on or at least share them with others because they will be doing the same. All in good fun.

3.    Tactless: Most Sagittarians suffer foot in mouth disease. Sagittarius loves to “tell it like it is.” However, the honesty doesn’t always come in the prettiest package. They’ve been known to bruise feelings with their bluntness. Sagittarians are not malicious, that is never their intent in fact they are one of the most honest people of the zodiac. They are like an open book to share with the world and would never harm anyone, but they are often misunderstood.

4.    Why Can’t You Ask For Help?: Sagittarians carry their hurt very close to their hearts. They find it very hard to ask for help or even articulate how truly they are feeling. They feel people closest to them should understand telepathically how they feel and feel shy about sharing their true emotions.

5. Stop Being So Restless

Sagittarius have a restless soul. They just want to explore the world and not fret about emotions and feelings. Sagittarians often find it hard to concentrate on several things at times. Others may be hurt by their lack of commitment but they don’t care, that’s not why they are on this planet, they are here to gain wisdom, learn and explore. Sagittarius has problems finishing some projects they started if it takes too long, they want immediate results and will move on to the next project if it takes too long.

6. Why are you so Impulsive?: Sagittarians are known to be notorious for their impulsive streak and being  worry free that the carefree nature will start stressing you out. Might even be borderline careless, but they just don’t care. Often a big spender they never seem to worry about the repercussions of their actions. It’s possible a lot of Sagittarians find themselves in messy situations, just because they didn’t think about the repercussions. But they manage to somehow always find their way out of the problems and strange situations, it’s possibly the lucky Jupiter that bails them out!

7. Over Optimist: Sagittarius like to see the rainbow even where one does not exist. They are the ever cheerful, looking at the positive side of life, skipping along to their next adventure. Most Sagittarians seem to be born with a happy bone in them. Try not to accuse them of this for you would lose a very dear friend.